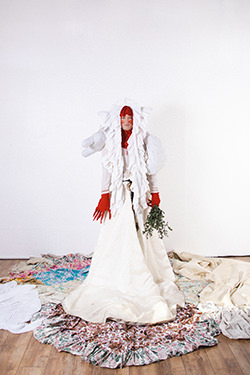 I am a composer and performer from south London. My work tends to feature repetition, endurance and found materials.

My piece Hold was performed at 2017’s hcmf// festival and the 2015 London Contemporary Music Festival was opened by a performance of my Tape Piece. I have made two theatrical pieces, Manspangled and Hum, both of which transferred to Tête à Tête: The Opera Festival at Kings Place. My solo piano piece Milk 2 was performed at the Art Gallery of New South Wales in Sydney as part of the Resonate 2015 festival.

I am developing a performance practice that involves conventional instruments, text, improvisation, movement and lip sync. I have performed pieces by Andy Ingamells, Neo Hülcker, Bastard Assignments and Mocrep.

I studied music at the University of Cambridge and composition at Trinity Laban where I awarded the Directors Prize for Composition. In 2016 I was a member of the Composer-Performer workshop at the International Summer Course for New Music in Darmstadt.

« Back to About Bastard Assignments