8 December 2020
Tim Rutherford-Johnson has picked our Lockdown Jams for his favourite releases of 2020 list: “Trust BA to make 2020 even weirder and more unsettling. […] the early instantiations capture like nothing else the unravelling, baffling, inexpertly improvisational mess that was spring 2020.”

March 2020
‘We can be quite rude with each other’ […] ‘Politeness takes up too much time’. If you ever wanted to know what a Bastard Assignments rehearsal is like, read Tim Rutherford-Johnson’s profile of us for Neue Zeitung für Musik issue 3/2020. (If your German’s not so great, you can also read it in English on The Rambler.)

31 March 2020
“one of the most exciting forces in contemporary music” – Josh Spero features our lockdown jams in his article on musicians in quarantine in the Financial Times (requires subscription to view).

10 October 2019
“There is no such thing as a typical Bastard Assignments performance… bizarre, compelling and truly unexpected” – Frieze magazine published a profile on us!

9 August 2018
“At times challenging, and often bordering on the absurd, […] works seamlessly blending aspects of stage, screen and sound project a vision of the future where art escapes identification and subversive humour plays a key role in our survival” – Ilia Rogatchevski reviews our Block 336 gig featuring Thick and Tight’s A Birthday Party in September’s issue of The Wire

April 2018
“mysterious… theatrical… everyday oddness… [a] more formally constrained Julius Eastman” – Stephen Chase characterises our pieces from hcmf// in his survey of the festival for Tempo: 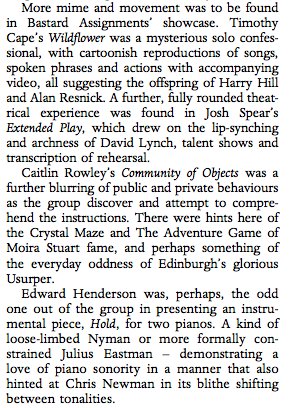 7 February 2018
“doesn’t it start to feel a lot like music?” Robert Barry reviews our gig with Mocrep in The Wire. 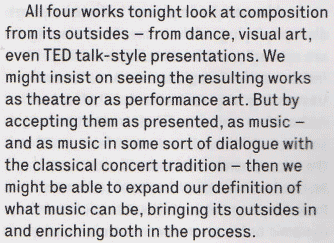 December 2017
Nice mentions for Bastard Assignments and a quote from Edward Henderson in the latest issue of The Wire:
“[…] regarding artworks like Sehgal’s This Progress[…] : ‘That’s music! That’s what I do! You’re a composer, Tino! It’s more than notes. But that’s music, to me.'”

28 September 2017
“Personal, fidgety, thrillingly odd, the works of the London-based foursome are Fluxus for the Facebook generation” – Igor Toronyi-Lalic in the hcmf 2017 programme

2 August 2017
Robert Barry in Sounds Like Now: This Is a Score. This Is Another. This Is a Third. Now Form a Band.

12 February 2017
‘From the bizarre to the wonderful’: Robert Hugill reviews NEW TEETH 4

7 May 2016
“On the margins of what?” Bastard Assignments and New Discipline on the London experimental music scene – article by Edward Henderson in MusikTexte 149

9 Jan 2016
Great review of the whole of LCMF 2015 by Mr Laurie Tompkins in Electronic Beats including nice write up of the BA contribution at the beginning! “Tape Piece is a characteristically impish acclimatization to Ambika P3″

17 Dec 2015
We’re in The Telegraph’s Classical write up of the year! Clearly our first Fresh & Clean gig stuck in his memory – check it out!

8 Dec 2015
Robert Hugill gave us a rather nice write up for our second Fresh & Clean gig at Asylum. Read it here »

21 Nov 2015
Christopher Fox interviewed Edward and Tim for his article in The Guardian on the UK’s new music scene.

23 July 2015
Kerry Andrew gives us a nice little mention in The Guardian.